Bank on it, we’re getting a sixth edition in 2022. You know how I can tell? Because of this mess:

Dungeons & Dragons Movie to Focus on the Eye of Vecna, Will Feature a Forgotten Realms Character

Dungeons & Dragons will feature a group of adventurers led by Raven Hightower, a warrior with a magic flamesword that’s haunted by his sister’s death. Other characters include the “half-dragon” Hack Karroway, the gnome thief Olivan Trickfoot, and a masked warrior named Alyssa Steelsong who is set to take over Palarandusk’s role when the dragon dies. Additionally, the main villain of the movie is a male drow named Razer Horlbar who once kept Raven and his sister as slaves, along with a female tiefling named Damala and a brutish warrior known only as “The Beast.”

All those characters, and the only actual character description we get is “brutish”.  It’ll be a whole diaper full of fun watching how casting and the studio’s Trust and Safety council jiggle the casting to get the demographics of Faerun juuuust right

The film is set in Faerun, and it will feature a Forgotten Realms character.  Um, shouldn’t they all be FR characters?  Chasing the Hand of Vecna which is no longer associated with Oerth for reasons too boring to go into here.  It involves RavenLoft. 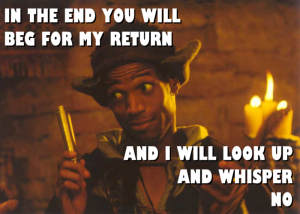 At any rate, you can bet this movie will hit six months too late to be relevant – anyone remember the Angry Birds movie?  Garbage Pail Kids?  You know, I know it, the American people know it.  WotC will have to release a new edition just to wash the taste of this out of our mouths.

About The Alt-Right DM

At long last, a tall cool drink of alt-right water in the midst of a liberal and cuckservative desert. Inspired by the need for soldiers in the Culture War, E. Reagan Wright volunteered to stand up to the forces of progressivism before they complete their takeover of the once energetic, diverse and just plain fun hobby of role-playing games. A lone voice in the digital wilderness preaching to that quiet, right-wing remnant that has languished in the cold for years. E. Reagan Wright loves his Mom, guns, apple pie, football, and calling that lesser game by its rightful name - soccer.
View all posts by The Alt-Right DM →
This entry was posted in Uncategorized and tagged oh lawd dey comin. Bookmark the permalink.

5 Responses to Signs of Six

The Last Redoubt
Of Wolves and Men

He Who Gives Hope Can Keep None For Himself

Save Versus All Wands

Purifying the RPG hobby with the cleansing power of mockery!

Purifying the RPG hobby with the cleansing power of mockery!

more than one way to skin a cat

Trying to find the best of the OSR and speculative fiction